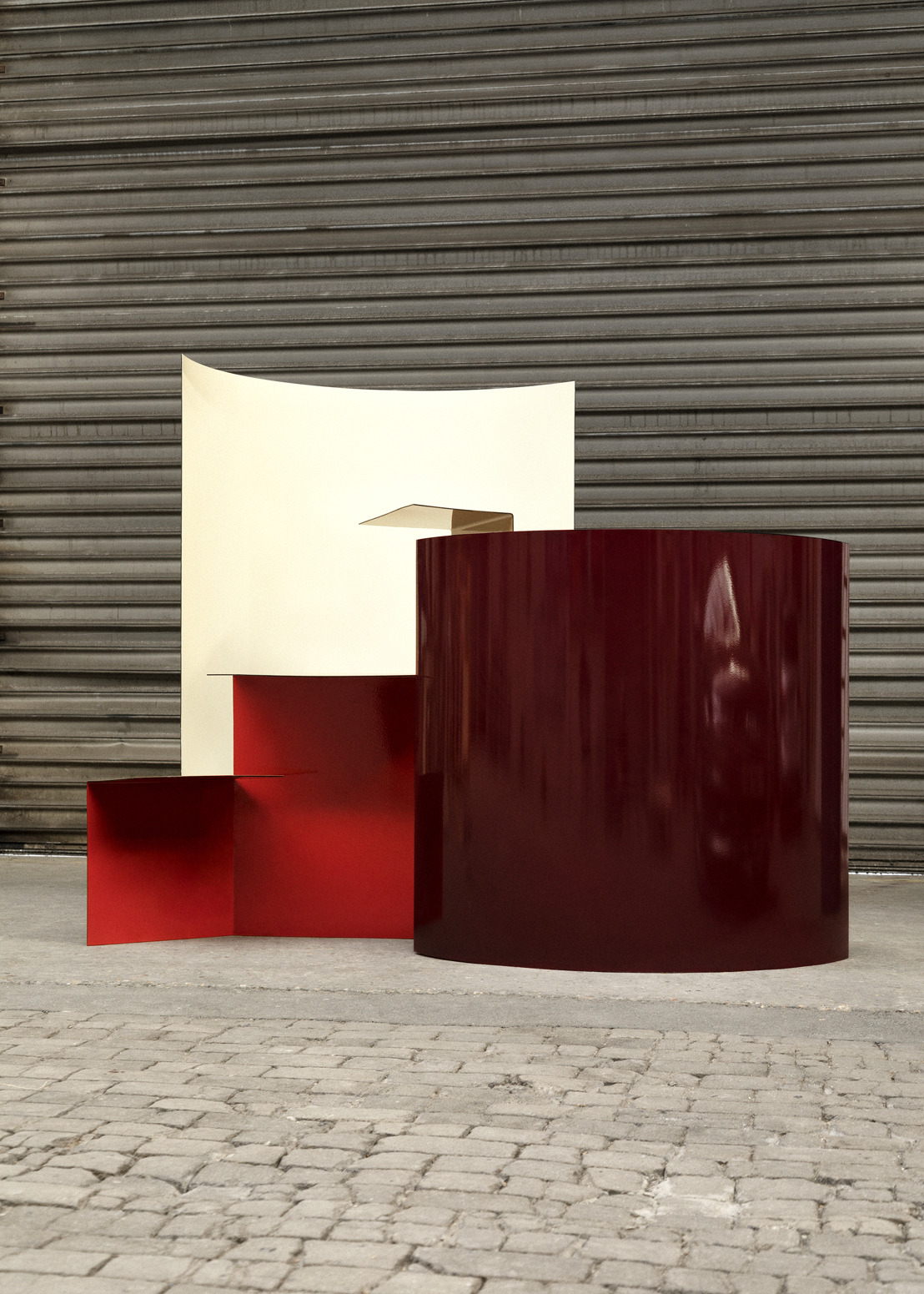 The Paravents, which are composed by various shapes and heights of curved and bent sheets of metal coated with vitrified enamel, are constructed to define portions of space that encircle different directions by resembling an explosion of playfully matched colours.

'Fireworks' is part of the ongoing research by Muller Van Severen around the investigation of the interactions between space and the objects that occupy it. In their practice Muller Van Severen explore the sense of verticality and have conceived these works as abstract compositions that relate directly to space. The shape of the Paravent is untarnished and essential; each reveals a meticulous quest for details and an elaborate and fascinating artisan process, executed by the sole remaining enemal factory in Belgium: Emaillerie Belge.

The exhibition 'Fireworks' by Muller Van Severen is set in a unique and extraordinary location within the building known as the 'Kremlin' in Via Giuseppe Colombo 81A, in Città Studi neighborhood, close to the Politecnico University.

The exhibition space is the headquarter of the architectural firm BINOCLE: the venue is characterized by its remarkable circular ground plan and is located in the drum of one of the domes of this outstanding building. The trapezoidal windows of the space offer an amazing view of Milan.

'Fireworks' reasserts the decade long collaboration between Massimo De Carlo and Lorenzo Bini, which pursues the shared vocation for the discovery of unusual venues. The desire to explore the city outside its conventional boundaries and habitual spots is an attitude that emphasizes Massimo De Carlo’s attitude and vision.

It was in early Spring 2011 that Muller van Severen was born, a creative collaboration that gave rise to a furniture collection by the Belgian duo that is Fien Muller and Hannes van Severen. Since then Fien and Hannes, both artists, have designed a complete furniture family. Their creations are globally identified in both private homes and public spaces.

At this moment, Muller Van Severen are working on a new building for the public broadcasting company VRT in collaboration with architects Robbrecht and Daem. They are partnering up with prestigious galleries (Kreo Paris, Matter New York, The Apartment Copenhagen, Andreas Murkudis Berlin) and they have collaborated on a series of objects with Petit h, Hermès.

In June 2016 Emaillerie Belge, the sole remaining enamel factory in Belgium, was taken over by Tanguy Van Quickenborne, whose main business is natural stone company Van Den Weghe. Van Den Weghe is specialised in luxury made to measure natural stone works and produced the very first pieces of muller van severen back in 2011. A long lasting collaboration.

Muller Van Severen has always been interested in working with enamel, so this was the perfect occasion to put ideas into reality.

Massimo De Carlo gallery was founded in Milan in 1987. For 30 years, Massimo De Carlo has presented to the public the most interesting voices of the international contemporary art scene, and promoted Italian art in the global arena . Massimo De Carlo operates in four locations: two in Milan (Via Ventura 5 and Piazza Belgioioso 2), one in London (55 South Audley Street) and one in Hong Kong (Pedder Building).

The BINOCLE studio, based in Milan, is led by Italian architect Lorenzo Bini. BINOCLE works on the transformation of existing spaces by creating temporary structures both permanent buildings and gardens. The building that houses the BINOCLE offices was built between 1924 and 1927 by Luigi Ronzoni (1881- 1945), a textile entrepreneur, who paid tribute to his mother by calling the building the same way. The structure was designed by Professor Ettore Molinari and designed by engineer Vittorio Molinari together with architect Giacomo Nicoli and engineer Arturo Danusso.